Solar cells are made up of seven parts: helium cell, EVA, silica gel, back sheet, junction box, alloy frame and aluminum alloy. It is a kind of photoelectric element that can convert energy. Its basic structure is to use P-type and N-type semiconductors. In the case of sunlight, light energy excites electrons into silicon atoms, and generates electrons and holes. These electrons and holes are influenced by the built-in potential, which is of the N and P-types respectively. The type of semiconductor is attractive and concentrates at both ends. At present, when an external electrode is connected to form a loop, thus forming a current, this is the principle of generating solar cells. The materials of solar cells are mainly semiconductors, mainly including silicon, miscellaneous components, polymeric materials and nano-crystals. Currently, monocrystalline silicon solar technology is the most advanced, but due to the high cost of monocrystalline silicon, it will gradually be produced from polycrystalline silicon solar energy. With the replacement of batteries, nanocrystalline solar cells gradually enter the field of vision. The figure below shows the solar panel system for home and some explanation of how the solar panels work to produces electric current for household usages. 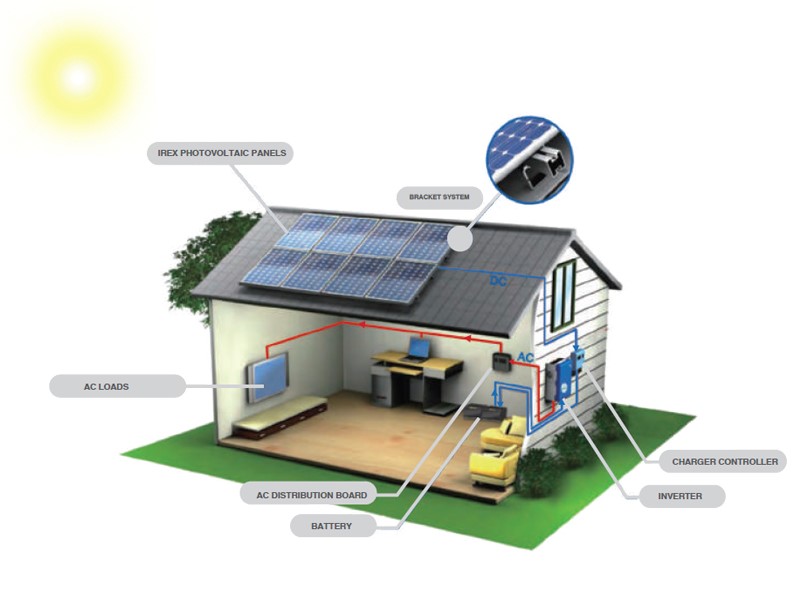 The sun will always release energy like a nuclear reactor. The energy released by the sun is called photons, that will hit the top surface of the photovoltaic panels in waves, where the sun’s electromagnetic radiation will be absorbed into the solar cells. It will absorb and gather sunlight through solar cells, start to produce direct current (DC). The direct current then will travel from the panels through an inverter and then convert the energy into usable electricity.

Typically, solar panel systems have a single inverter for the entire system or a micro inverter connected to every panel. Either way, the purpose of the inverter is to convert direct currents (DC) into alternative currents (AC), which is what makes usable electricity inside the home. Sometimes solar panels will produce more power than we need. When this situation happens, the electricity will go back onto the grid. This is why we'll still want to be attached to the traditional power grid.

In conclusion, it is undeniable that solar energy has brought many benefits to society. However, there is still a weakness in the use of solar energy which is the amount of sunlight reaching the earth's surface. It depends on the location, day, year and weather conditions. Because the sun does not radiate enough energy at one place at a time, a large area is needed to gather enough energy to produce enough energy.

How Will 5G Reshape Telco Stocks?