Solar parks are also known as solar farms and photovoltaic power stations. It is a large scale of solar installation where photovoltaic panels (PV) are used to harvest a large amount of sun's power. They are slightly different than the rooftop solar system and event commercial solar power system in a number of important ways. Solar electricity consumption is on the way up now. Many countries had started to develop solar projects 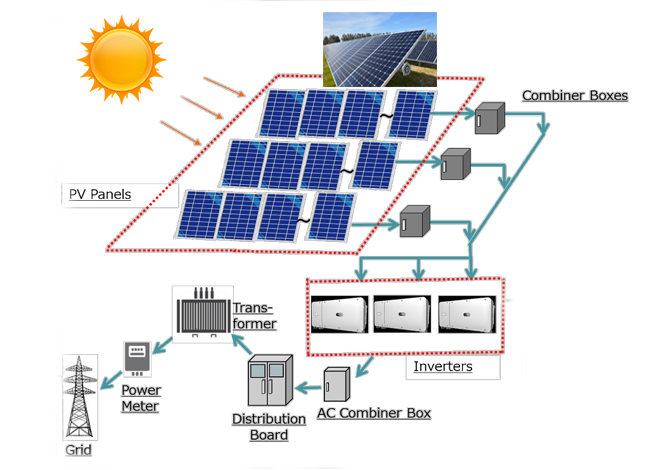 The equipment in a solar park includes solar panels, racking, cables, inverters, transformers, and a power line or substation to deliver the power to the electric transmission grid.

The main function of solar electric panels is to create or generate electricity directly from the sunlight. The semiconductors inside the solar panels are very sensitive to light. When the panels were hit by sunlight, the solar panels will be activated and react with light to produce usable electricity. Mostly all the solar parks are grouped together to produce large electricity. In addition, each of the panels will be mounted by a single axis tracking system. It allows the panels to rotate from east to west followed by the sun throughout the day and highly been exposed by the light.

The inverter is typically located in an accessible location. Most of the inverter is mounted with the exterior sidewall of the home near the electrical main or sub-panels. The inverter in the solar parks is functioning as the converter to change the DC electricity generated by solar panels into 120-volt Ac that can be fed into a commercial electrical grid or used by a local. Besides that, solar power inverters also have a special function including the maximum power point tracking and anti-islanding protection.

The solar system is tied to the utility grid, the DC power from the solar array is converted into 120/240 volt AC power and fed directly into the utility power distribution system of the building. The power is “net metered,” which means it reduces demand for power from the utility when the solar array is generating electricity – thus lowering the utility bill. These grid-tied systems automatically shut off if utility power goes offline, protecting workers from power being back-fed into the grid during an outage. These types of solar-powered electric systems are known as “on-grid” or “battery-less” and makeup approximately 98% of the solar power systems being installed today.

In nutshell, with a fresh flow of revenue generated from the solar parks, governments will have more options in allocating those budgets toward essential public services, reducing property tax rates broadly, or so on. In addition, contributing clean, green power from the solar electric system helps to create jobs and can mitigate the pollution and other problems produced by electricity derived from fossil fuel. Solar-powered electrical generating systems will help to reduce the impact on the environment and save money at the same time.

How Will 5G Reshape Telco Stocks?